How picture and album sharing works with contributors

Your pictures are completely private unless you invite guests to contribute to them. Let's explore.

Written by Barbara
Updated over a week ago

Telling stories is more fun when you have the right audience. You own your Ponga pictures and they're completely private unless you decide to share them. Should you share them, you can do so in a way that selects just the people you want to have access. This article walks you through how our sharing and privacy features work.

With your paid membership account, you can upload pictures or create albums. Every picture an album is private, and you own the content. Only you can invite contributors, and you can invite as many guest contributors as you'd like at no added cost. Contributors can contribute comments, recordings, or any kind of content for free. They cannot upload new pictures, create albums or add pictures to albums, however. Members can be contributors to other members' pictures and albums. We'll see more about that in the example below.

When your contributors open an album shared with them, they'll notice a curved arrow in the bottom of each image. These are the pictures shared with them. In the example album below, "Aunt Alice," you can see from the upper right that was shared by Elizabeth Griscomb and viewed by a contributor. We can see that this album is also a member because they own the picture in the top left row. Notice that there's no arrow in the bottom right corner on the picture tile. 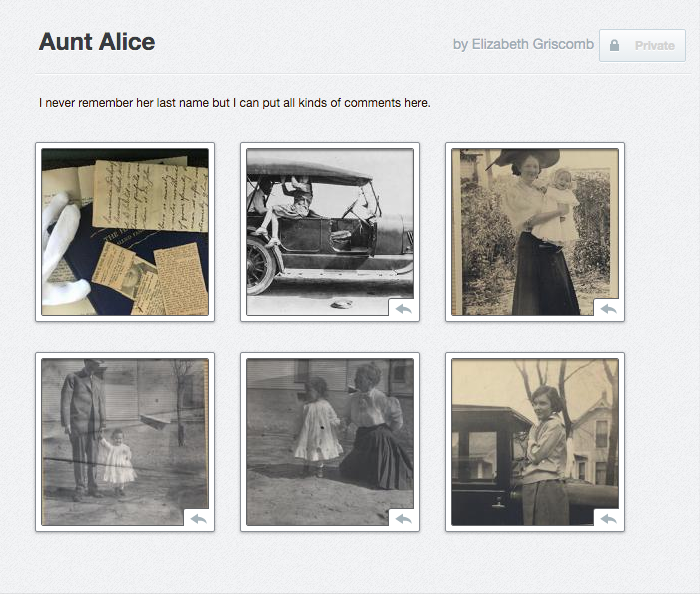 With both pictures and albums, owners add contributors by going to the Share panel in the upper right corner of the album or picture and adding the email addresses of the people they want to share with. 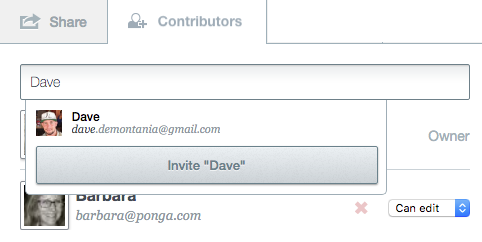 When a picture is shared, the contributors you've shared it with can see who created it because your name appears in the upper right corner near the share panel. Notice that in this example, the name set Account Settings is "Elizabeth Griscomb" she might also have used her married name, "Betsy Ross," "Aunt Betsy," or simply "Betsy." All that matters is that she's recognized by the people she's sharing with

Only members can upload pictures and use the Ponga face detection features to sort pictures by person. With your membership account, you put names to faces, and Ponga creates albums for you that include all of the pictures of the person you've named. We'll also give you an opportunity to invite others to view or contribute to the pictures in that album.

You might for example, invite your brother to contribute to the pictures you have of him. (Including those awkward you embarrassed him with at his wedding reception.) When you invite your brother to contribute to an album, it is still private, he's now added by private invitation only. You can privately invite as many contributors as you like to a picture or an album. With that private invitation, contributors cannot

The private pictures or albums you share with contributors are viewable in the Shared with Me view in their Ponga account. This compiles all pictures shared with a contributor from all members across all albums. The albums shared with them also appear in their list of albums. Once invited, your contributors don't have to go hunting for a link. It's right there for them.

If you remove someone as a contributor, it disappears from their Shared with Me list. If they previously kept a link (using Notes, Notion, Evernote or some other bookmarking app) they can follow the link but will only see a 404 Error suggesting that the picture isn't there. 🤫 They'll never know.

If the album or picture is private, contributors can't download the pictures and they can't reshare them with others. They can't even open the share panel. If they copy out the link from their browser, that link is inaccessible. Again, they'll see the 404 Error. The picture's just not there.

You control the privacy settings for all pictures uploaded into your account. These are the pictures you own. Only members can control who can contribute to their pictures or albums.

Albums are collections of pictures but since they might include pictures owned by multiple members, privacy issues can be subtle. This discussion goes into more detail than you might need at first, but as you get familiar with the way Ponga works, it will all seem pretty straightforward.

It can be really useful to share albums. One picture may be shared with different sets of contributors by adding it to two different albums. There's a simple rule to understand:

As the member who owns the picture, you can look in the share panel. You'll see not only who the picture is shared with but also what albums it has been added to. The people invited to contribute to your picture may also be Ponga members and can add your picture to their own private albums. You'll be notified.

Members can add your picture to their albums and it will be viewable to the superset of people in the albums they create. As the owner of the picture, you will always be able to see what albums it has been added to, and you'll be notified.

You can remove contributors at any time. When you do, the picture disappears from their albums. Your picture is still in your account and any other albums that included it. Similarly, if you add a picture shared with you to one of your albums, the owner of that picture is added as a collaborator to that album and can see in the share panel for the picture that it's been added to that album.

Sharing can get tricky. Feel free to reach out if we can answer any questions. Just ask us in the chat bot. If we aren't immediately available, include your email and we'll get back to you as quickly as possible.

Did this answer your question?